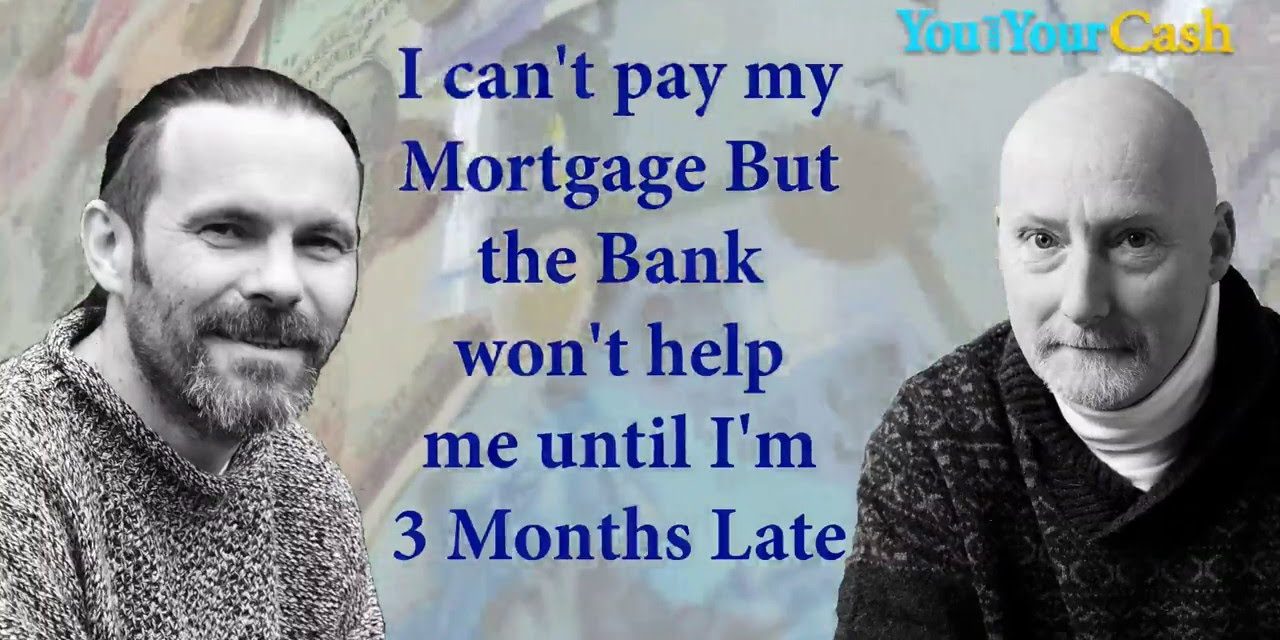 I Can’t Pay the Mortgage but the Bank Won’t Help Me Until I’m 3 Months falling behind. Here is Why! #Boracina Cash Home Buyer when you need to sell your house fast Go Here we’re going to be looking again at the subject of mortgages. This one’s from Danny, and he says, “I can’t pay the mortgage, but the staff say to me, they can’t help me until I’m three months in arrears.” Now Simon, I find that a bit odd, surely it would make sense for staff to help you as soon as you’ve got a problem.

Absolutely, and their duty is to actually assist, okay. This is spelled out with the Financial Conduct Authority, and anybody that wants to check out MCOB 13, you’ll see that there is an obligation for the mortgage company to try to assist, and try to be proactive in assisting, and plus of course, as an ex-debt collector myself, working for the bank. I knew that if someone’s actually phoning up, to try and make some kind of payment arrangement in advance of a problem-

Make sure it makes my life easier.

Okay? Now this is what’s actually happening, and this is a typical kind of response from staff, who are working for mortgage companies, where the mortgage has been securitized.

What does that mean exactly?

Yeah, absolutely. So from the mortgage company’s point of view, the reason that they say they need to engage in what’s called securitization, is to free up cash flow, is to free up the money, so they can invest that back into their business, and do things with it, and advance monies to more people, and so on, and so on, and so forth, okay? I don’t buy that for one second. That’s the spin that the mortgage company has put on it. So talking about the upline, and this is with regards to the new owners of your mortgage company, these are the owners that you know nothing about. Quite simply, those owners are able to ensure the nonpayment of the mortgage. In other words, if you experience difficulty, they win.

I’d heard a rumor that they’d got these things insured.

They either insure them, or they can hedge. In other words, they do some other financial arrangement, or make some other financial transaction, which in effect creates the same scenario. The scenario is that when you, as a borrower, are experiencing difficulty, when an account goes three months in arrears, or 90 days in arrears, by sheer coincidence of course, the upline owner of your mortgage will get paid out. It’s called a trigger, the 90 day period is called a trigger. It will trigger either an insurance payout, or some other kind of financial transaction payout, typically regarding hedging.

So just in very basic, simple terms then, it’s actually in the interests of the mortgage holders, for you not to pay for three months.

Absolutely, and if we go back to what is now a really well known period of time, that’s 2007-2008, when we had what’s called the credit crunch occur. Some very large lenders, American lenders, had actually gambled against their own mortgages. In other words the mortgages which they had approved, written, and granted to people, okay. They actually gambled against the performance of those mortgage accounts. When everything went belly up, shall we say. I was going to say something different, but I won’t.

I thought you were going to, I did actually, yes.

I’ll be polite. When everything went wrong, JP Morgan, for example, were one of the banks named, they made profit when the world’s economy almost went bust. This is happening on a very smaller scale with each mortgage lender, and specifically those that are engaging in securitization, and selling on the mortgage ownership.

Okay. So if we find ourselves in that type of situation, then what is the best thing to do?

Well, I think there’s only one thing you can do, in terms of attempting to make a proactive, and preemptive payment arrangement, rather than trying to battle your way through matters with the member of staff on the phone, who have perhaps been told internally, don’t make any payment arrangements until it’s three months in arrears. I think what you have to do is just go along and proceed, as if you are Mom or Dad, taking control of member of staff, that is actually acting as child in this whole relationship. You have to take the, you have to take the higher ground.

What I would suggest is that people, especially if it’s a short term problem, right to the mortgage lender, spell out what the problem is, perhaps conduct, or complete some kind of income and expenditure review yourself, because that might actually in going through that process reveal, depending on the problem, reveal some way of resolving the problem, especially if you’re not managing your finances properly, or there’s additional expenditures, which you can kind of strip out of your bank account, and not have to pay.

But in essence, at least in that respect, you’re then demonstrating to the mortgage company, that you are willing, and that you have an intention to pay, and potentially that you have some kind of longterm plan, or medium to long-term plan, to bring everything back in line. Should that ever proceed to court, what I would say is the courts do not want to take people’s homes away from them.

Ultimately, the reason that people find themselves in court is because they’re not paying. If a judge can see that there is some kind of plan in place, or that it’s for a genuine reason, or that the problem is going to be very short term, as opposed to lasting 15 years or so, then they are highly unlikely to award some kind of possession order. They are more than likely going to suspend that possession order, and make an arrangement with you, and see whether you can stick to the arrangement that you’ve made.

So if you, if you are proactive, do the job that the bank would generally require you to do, or ask you to do, but do that in advance, put it in writing, send it all off for recorded delivery, keep your records. If the worst comes to the worst, at least you’ve got something to present to the judge to say “Look, I tried to play my part in this whole thing. Problems do happen.” Let’s not forget back in 2007, 2008, some very large institutions, calling themselves banks, actually required a bailout from taxpayers, because they had mismanaged their affairs and were due to go bust?

Would they do that? Of course, I suppose it goes without saying that you want to protect yourself from any charges they might be making against you. So might it be a good idea to write to them at the same time, and say you rescind the direct debit, for instance?

behind on mortgage payments need help

You could do that. I mean, it really does depend on your own particular set of circumstances. Of course we have made some shows which talk about charges, and getting refunds, and so on, and so forth. There are various techniques that you can employ. I think the main problem that people have got, is that there’s going to be a fear factor in terms of “Well will the mortgage company take some kind of action against me? Are they going to try and kick me out my home?” That’s probably the main concern for most people. So when it comes down to the charges, and any additional interest, that can always be corrected at a later date.

Focus on the problem, try to overcome the problem, and try to show your adversary, or counterpart, I’m talking about the bank, try to show them that you mean business, and that you’re actually approaching this with good intentions.

But at the same time, you’re not going to be messing around.

Yeah, because I mean, in my dealings with mortgage companies, most of the time they are, there’s a veneer of help, but when you start scratching the veneer, they’re actually quite mercenary.

Well, let’s put it this way. I was, as part of the function that I performed for the banks where I worked, part of that function was debt recovery, okay. Members of staff, certainly in my day, and it’s not that long ago, but in my day, we were trained, and we had various tools available to us. At the end of the day, these customers are the people that paid our salaries, ultimately. Because without any customers, there was no business, and there was no job for me to do.

So ultimately bank staff have got to remember that with no customers, they’ve got no job. Some of these customers, going through a short term problem.

2 months behind on mortgage

Could actually earn the bank a lot of profit, long term. Let’s not forget, the banks had problems, okay. People, we, the people, bailed them out, okay. So a lot of these members of staff should be showing a little bit more gratitude, and they should remember that. However, it is unacceptable for a member of staff to simply demand payment, and not seek to assist in any other way. Every single bank and financial institution has its own set of what we used to call collection tools, okay. That is a set of mechanisms, or set of ideas, they can apply to get you out of trouble, or to help you over a difficult period.

A payment holiday, they can arrange all of it, because ultimately, ultimately the decision as to what policy they have in place. Well, that decision rests with members of staff.

The policy of the company is written by a member of staff.

And it’s carried out by a member of staff.

Yeah, super. Well, I notice in our help sheet for this subject is a lot longer than usual.

Yep. Yep. Let’s show people what they can obtain. So this is the free help sheet, which you can download from the website, okay? So you can get free pictures of myself and Mark, so no dart throwing please. You never know what effects that might actually have in real life, if you hit me in the forehead or something.

Boracina Buy Houses AS IS, your #1 source for residential or commercial real estate solution call us at 407-792-5599 We can Close Quickly and pay all your closing costs.

How to Sell a House During Real Estate Probate Process Ultimate Guide
January 5, 2021

Will I Have To Sell My House To Qualify For Medicaid Boracina Cash Home Buy
September 14, 2020